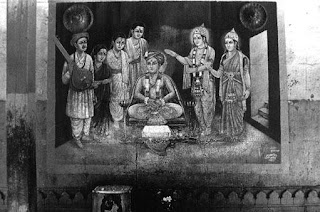 Jnanadeva of Devagri (Maharashtra) lived late in the 13th during the rule of King Ramadevarao, immediately prior to the Islamic invasions of that part of India. He lived for an all too brief 22 years and left a rich body of spiritual writings [Amritanubhava, the Abhangas, the Jnanesvari and the Changadeva Pasashti]. Biographical details are sketchy. It seems Jnanadeva lived approximately 1275 to 1296. Some scholars allege some attributed works are written by two different persons of the same name; there are two tombs [or Samadhi] in existence for Jnanadeva, which further confuses historical data. Jnanadeva translated the Bhagavad Gita into Marathi and provided a magnificent commentary that is richly illustrated with idiom, metaphor, simile and homely example. His principal work, the Jnanesvari was named Bhavartha Deepika (Light on the Inner Meaning); however it goes by the name "the Jnanesvari" in honour of his name, Jnanadeva. His works charged the entire region of Maharashtra with devotion and wisdom.

Jnanadeva inspired other saints that followed him - Namadeva, the tailor's son, Narahari, the goldsmith, Gora the potter, Chokamela and his wife, who were from a very low caste and Janabai, the maid servant, and so on. He was the pioneer of the Abhanga tradition, and of the Varkari tradition, the annual pilgrimage to the sacred Vittal Mandir of Pandaripur. In the ceturies which proceeded his life, the seed which he created blossomed and many other great seers and upholders of Hinduism in that land came forth, such Eknath, Tukaram and Ramdas. It is not inaccurate to say that the great political renaissance of Hinduism that occurred in Maharasthra which was the first reggion to decimate the Moghuls owes much to the renewed faith in people's hearts that was imparted by Jnanadeva, some centuries earlier.

Jnanadeva voluntarily left his body for union with the Divine in Alandi, near Poona in 1296 at the age of 22 (25 by some other scholars). He had done what he had come to do in his birth. He took his last bath, and descended the steps into the Samadhi that had been prepared for him. Sitting in the padma position and facing North, he voluntarily released his mortal coil.

For a longer biography, which includes some of his teachings, please go to the following page:

The Bhavartha Deepika (Light on the Inner Meaning, Jnanadeva's famous book on the Bhagavad Gita is available in English to read online, at the following URL: www.bvbpune.org/contents1.html
Posted by Karsewak at 3:13 AM

Labels: Famous Sages and Others